Today we are lucky to have a guest articles from Gus.  Gus is a regular Player at the Golden Porg and has taken home his own Golden Porg and several Best OpFor prizes with his Imperial legion.  I asked Gus to share his experiences from the LVO where he went to the top four before eventually losing to the man who would win it all. 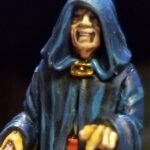 Hello my fellow Porgs and Porgettes, I am reflecting today on my experience at LVO 2020. I was lucky enough to go 4-0 day 1 and make it to the semi-final round where I was tragically (but not unexpectedly) beaten by the man who won the event and also the reigning world champion, Luke Cook. What follows is a breakdown of both the list and mission cards I ran at LVO, followed by the games I played.

Pip 2: Give In To Your Anger, Push

Pip 1: And Now You Will Die, Ambush

My goal with this list was, simply, to create the best Imperial list possible, and while I certainly fell short of that, I had a rationale for every unit and upgrade that I took. For the corps, it was a binary choice between either running 3 Shoretroopers and 3 mortars, or running 2 Shores, 2 Storms, and 2 Mortars. I chose to run 2 of each because while the full Shoretrooper gunline is very good at killing enemy units and drowning them in suppression, it is vulnerable to enemy snipers and it struggles in certain missions because mortars can neither claim objectives in Recover The Supplies nor add or subtract wounds in Sabotage the Vaporators. This is a crippling problem, because the Shoretroopers are expensive line infantry that need to be on the front shooting, rather than skulking in the back, scoring objectives. Moreover, I have always favored a list with a large midfield presence, and five units of infantry allows me to exert pressure when and where I need it. This is not to criticize the mortars, which are the lynchpin of my list with their Comm Relays, merely an acknowledgement of what they can and can’t do.

My lone support unit was an E-Webb Blaster Team, perhaps the most tragically underrated unit in the game. I play the E-Webb as a defensive, area-denial unit, designed to blunt alpha strikes with a combination of sentinel and a surge to critical, which made Tauntauns squirm several times. I considered putting a Linked Targeting Array on my E-Webb, but I found that the points could be better spent elsewhere.

In my special forces slot, I took a unit of death troopers with the config and the DLT-19D; the standard loadout. While Death Troopers are most often seen with Director Krennic rather than Palpatine, I believe that give me an edge over other Imperial gunlines by being able to throw a large dice pool at range four, usually twice a turn.

Last, but certainly not least, I had the Dark Lord of The Sith himself. It has always struck me as odd why Palpatine sees such little play at the top tables, and I suspect that will change given that Palpatine lists won both NOVA and LVO. However, Palpatine requires a degree of finesse when playing him, especially without either Royal Guard or Esteemed Leader. The key thing to understand is that Palpatine is best used as an area denial unit, moving very conservatively in the midfield and staying out of LOS as often as possible. While he may not be making attacks for most of the game, he is set up to punish any attempt by an opponent to storm the middle of the board, usually an important objective, with his And Now You Will Die attacks. On Palpatine I took upgrades in all of his slots, and I made use of all of them. Anger and Force Push are practically staples on him, with anger improving his attack dice on his pip 1 turn and force push keeping those pesky Tauntauns from hiding. Aggressive Tactics, simply put, is one of the best cards in the game when combined with Coordinate and Comms Relay from the Shoretroopers and Mortars, and I don’t think I played a single game where aggressive tactics did not earn its salt. The ability to hand out up to four surge tokens to my corps made them far more durable and it is likely this reason that Shoretroopers are the corps of choice among imperial players. The last upgrade I took was Battle Meditation, which allowed me to generate lots of orders even on turns where I had to order only Palpatine. First, I would battle meditate an order from him to the Shoretroopers, then Coordinate to the Mortars before Relaying it back to him. Overall, bringing Palpatine was the best and most consequential decision I made in list building, as he was able to blunt the Tauntaun offensive that I faced.

Round one was a nail biter. I was paired against the player who had beaten me in the semi-finals at NOVA last year and I was determined not to repeat the result. We played Key Positions on Major Offensive with Rapid Reinforcements. He was running triple Tauntauns and Sabine, along with an officer, three snipers and three naked troopers. I deployed very conservatively, wanting to avoid both his Tauntauns and his snipers. My list survived the Tauntaun onslaught, and on turns four and five I moved up to seize the middle objective. His army, less worn down than mine but far less dangerous, did the same, and he had one more unit on the objective coming into turn 6 than I did. The game came down to a clutch move from Palpatine, who used his free attacks from And Now You Will Die to blast Sabine off the board before moving to Pull The Strings on a unit in the center. The measurement on Pull The Strings was really, really close, but old Sheev was able to hobble just far enough to secure the victory.

My second game was against an unorthodox rebel list with Jyn, Leia, two Rebel Veterans with Mark 3 Blasters and two Tauntauns with a pair Snipers and Z-6 Rebel Troopers. We played key positions and while neither of us were able to score the middle, I won on points. Unfortunately for my opponent, there was not much line of sight blocking terrain in the middle, so his troopers were scythed down by mine.

My third game was Vaporators on Battle Lines and Clear Conditions. My third opponent had a very interesting list, with Leia, Sabine, three troopers, three tauntauns, and two Wookies. . I deployed very conservatively with my army and positioned my vaporators as close to each other as possible. Unfortunately for my opponent, I had the bid, forcing him to come to me. He played cagey for the first few turns, but ultimately he had to commit to attacking my gunline on my terms, which did not fare well for his furry minions. The decisive play of the game was me playing Give In To Your Anger when he played Explosions, hoping to detonate bombs in the middle of my clustered army. Unfortunately, I saw the play coming and double moved a stormtrooper squad into combat with Sabine, preventing her from getting to the position she needed to be in.

I remember very little of my final game; I was by that point very tired. What I do remember was that my opponent was an incredible sport despite having a very bad matchup against me. We played Vaporators, and like last time I played conservatively while picking his units off from afar. His last ditch effort to assassinate Palpatine with a Rebellious Jyn Erso did not pan out, and she received a few thousand volts of electricity for her trouble. With that, I was undefeated on day one and headed into day two with a degree of confidence. This was my second national event, and for the second time I was headed to the top 8.

My top 8 match on Day 2 was against Shawn Morris, who is a member of the Legion Academy Podcast. He had Leia, Chewbacca, two Snipers, 5 Troopers, and 3 Tauntauns. He won initiative, and flipped mission cards to play Key Positions, which was very bad for me because the central piece stretched out very close to his board edge. I countered my flipping to Disarray to hopefully give myself a fighting chance. We both deployed cautiously, putting most of our armies on the same side of the board, hoping to race to the middle objective. In the early turns I raced most of my force up to secure the two Key Positions needed for victory. Shawn took a much more cautious approach, which I think may have cost him the game. By waiting until turn 4 to start playing for the objective, he did not have enough time to force me off of it, despite his masterful play with his Tauntauns and I was able to win the middle objective with sheer bodies.

The final game I played was against none other than Luke Cook, the reigning World Champion. I had met him the day prior and I knew that he was also running Palpatine with Shoretroopers. The differences in lists proved to be killer, however. Instead of Death Troopers, Stormtroopers, and an E-Webb, Luke had a full unit of Royal Guard and three snipers. Seeing this, I knew I was I trouble. My list pays a premium for units with long range and good armor saves, and here were three units with longer range that didn’t care about my armor saves. With this in mind, I flipped to Recover The Supplies and decided to go big or go home. I had no chance of beating him in a shooting match, not only due to his list countering mine, but also his masterful gameplay, which I had heard about, but not witnessed firsthand until that day. So, I decided to bum rush the central supply token and pray to god I could escape with it before he caught on to what I was doing. Unfortunately, it did not work out this way. He placed his units in the perfect spots to be out of range of my supporting units while they laid down fire on my advancing infantry. This combined with my own very sloppy play in the game (I forgot to put out Surge tokens on turn 1, among other things), which was likely due to my poor sleep and overall mental burnout having to play 6 games of Legion, led to a crushing defeat.

Overall, LVO was a wonderful experience, not only is Vegas an incredible place to visit, but I also played some of the finest games of Legion I have ever played against the best players in the world.