Just like that, another Porg is in the books.  We had ten players for the inauguration of the second year of the Golden Porg Tournament.  I was quite happy with the Porg Trophy for this event. It turned out to be a very appropriate one as well, with two undefeated Imperial players.

This was also the first Porg where I used Tabletop TO’s free event system. I played with the system a few times before the event and was glad I did.  Once I knew what I was doing it was fairly straightforward and easy to use.

With ten players, the factions were evenly split.  I would have imagined this to have been the last two-faction Porg, but given upcoming release delays, I suspect that will not be the case. Regardless, honors were close;  Imperials combined for an 8-7 record, while the Rebels combined for seven wins and eight loses.

Unsurprisingly, multiple units of Tantuan cavalry where taken in four out of five Rebel lists.  The sole outlier chose to field triple rotary AT-RTs. Heavy vehicles were also taken in three lists.  One Rebel player fielded a X-34 Landspeeder with an ion blaster, while one Imperial player took a tank and another opted for two (two!) AT-STs. 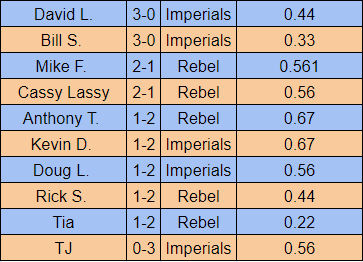 E-Webs and 1.4FD Turrets were also represented, through more E-webs were fielded than turrets.

Special forces strike teams were taken in three total lists.  One Imperial list took them as saboteurs, and two Rebel players took them as snipers.   All other Imperial Special Forces units (Death Troopers, Royal Guard) where also included in at least one list, though none of the other Rebel options were included.  Both Imperial Operatives were included, with Bossk the more popular at two lists. Neither of the Rebels Operatives were taken.

Leia was the most popular commander, and appeared in all five Rebel lists.  Only once was she paired with another commander, her brother. Veers led three Imperial lists, while two were led by junior officers.  Each faction included a selection of their new corps unit and their weapon detachments.

So while I was writing this report, as a way of distracting myself from my continued dearth of Dewbacks, I decided to build a list which differed from what seemed to be the standard composition of the Rebel list.  I would have the opportunity to play it at an upcoming (since happened) tournament, that I was attending rather than running. I wanted the list to be different but viable. I was informed by the data I noted above and decided to accept a nine activation list.

I took Han with Esteemed Leader as my commander.  For furry companionship I loaded up on two units of three Wookie Warriors, a selection neglected at the Porg, with Tenacity.  Two Tantuans with Long Range Comms and Endurance are an asset too good to ignore. I then had points for a fully loaded Fleet Trooper squad (another unit scorned at the Porg) and three Rebel Troopers squads with Z-6s, two of which also had medical droids.

The plan was to attack.  Two thirds of my activation had only Range 2 weapons.  I took Han’s pip one/zero command card and Ambush. I also took Han’s pip two with Turning the Tide, but included Assault and Covering Fire over Han’s pip three.  The idea is to use the Wookiers and Tantuans to push with Han and the Infantry rolling up in support. Between Tantuans, Wookies, med bots, infinite dodges, and Han’s distraction jank I figured I offered enough threats at nine activitions to be viable.

As it happened, I turned out to be mostly right.  I took the list to two-and-one at the aforementioned local tournament.  I lost a close game and I won a close game, and I played one game where the list operated at maximum potential and janked the rug out from under my unfortunate opponent, who played a determined, if doomed, defense with great spirit.

I want to point out the obvious: Tantuans are good.  They are powerful, tough, cheap, flexible, and tactically forgiving.  They are Mongol horse archers, except riding space goats with lasers. Starting at less than a hundred points, what is there not to love?

Now I want to point out the less obvious.  At the time of writing, all three of the local/region tournaments were won by Imperial players who did not have access to Tantuans, or even any creature troopers.  I also want to point out that each event was won by a different player, though all are Porg regulars. Furthermore, in two cases these players beat a Rebel player fielding Tantuans at the final table.

The upshot of this is that while Tantuans are very good, they are not without answers.  Shoretroopers and their Mortars are threatening, if expensive units. The economical efficiency of E-web teams is evidenced by their presence in all three winning lists.  Imperial Speeder Bikes and Royal Guard are both relatively inexpensive units which can answer Tantuans.

Rebels have their own set of answers. Massed Z-6 is a good fix all, while scatter gun wielding Fleets throw enough dice to make pushing critics credible, and the 1.4FD Turret can handle Tantuans as well as Imperial armor.  I have not seen anyone take Rebel combat heroes (Luke or Sabine) and successfully negate Tantuans and Tantuan v. Tantuan matchs ups tend to devolve into an activation race.

While I am not denying that Tantuans are very powerful, and definitely a strong candidate for the nebulous distinction of the ‘most powerful unit in the game,’ I want to point out that there are counters which empirically work against them.