Another Porg is in the books.  I want to thank all the amazing players who came out.  It was a great way to celebrate a year of Porgs. We had twelve attendees, in what was a very competitive Porg.  Faction balance swung toward the Galactic Empire, who outnumbered the Rebellion two to one. Two players, one from each faction went three and zero; while the number two rebel player lost in round three the player who would go first overall. In all it was a competitive and fun Porg. I give my thoughts below. 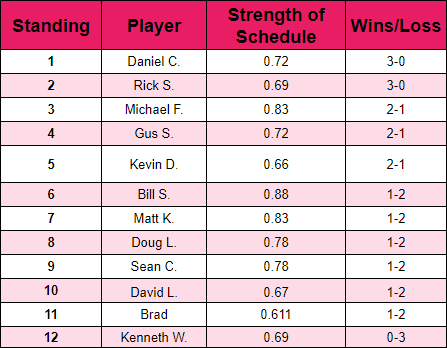 Bids are one of the most interesting pre game elements; how much are you willing to give up to determine blue player?  In addition to activating first, building the mission deck, picking sides, and vetoing first, Blue player is also a tie-breaker in the RRG, so it has more than a little value.  But those points are what you use to make your army, and a big bid can come in exchange for upgrades. For the Porg their average bid was 2.08. Three player took zero bids, collectively they went three and six and between them played only one game as blue player, against each other. Two player took seven point bids, the largest bid of the porg.  They ended up going four and two and being blue player every game.

The mode and median of the bids was one point.  Five player took one point bids and were blue player in seven of the fifteen player games.  But the zero and one one point bids makeup full two thirds of the entire pool and most of the ‘blue player’ results came at the hands of another player with a low bid.  The remaining players (one 2 point bid, one 4 point bid, and two 7 point bids) were bue player ten times in their twelve games.

We must be careful when looking at this data to read too much into it.  Different situations can force different bid scenarios, and bid it not a straight meritic which can easily be applied or correlated to win/loss.  A specific bid isn’t necessary for a good list, but good list are selective about their bid, rather than making it an afterthought.

An interesting aspect the most recent Porg was that only one force user was taken.  Luke Skywalker was paired with Sabine in just one rebel list. In the other rebel lists, Sabine paired with general Solo, while Leia led the other two lists.  For the Imperials, Krennic edged Veers out as the preferred commander, while some lists included both of them. But all Imperial lists included at least one of them. Both Bossk and Boba made showings in various lists.

Imperial army composition continued to be more diverse outside of commanders, with everything but speeder bikes and the AT-ST represented.  The Rebel Alliance disdained both the Air and Land speeders, Wookies, and 1.4 FD turrets. Furthermore, pathfinders were taken in only one list. AT-RTs continued to the most represented vehicle from either faction, as a trio of them with flamethrowers supported a surprising all fleet trooper list.

Once again I enter the dangerous remit of remaining within my dataset while still providing some analysis. An unoriginal observation is that units of the Rebel Alliance tend to have a more variable, but often potentially damage output than their more consistent Imperial counter parts.  I think this, combined with the relatively lower resilience of Rebel units, tends to lean Rebel list build toward multiples of the same unit. “Oh what? Blanked out with a Z-6 squad?, Good thing I have three to five more them to activate this turn.” This isn’t a condemnation of other options, but an explanation of what I think is driving people to their decisions.   Redundancy and economies of scale seem to foundational principles.

While Imperials do have a slightly lower activation average, both Rebel and Imperial trended back toward ten.  The second place Imperial list had ten activiations while all three Rebel lists in the top five had at least ten activations.  The fifth place Imperial list had eight activations, and ran snow troopers, deaths and the TX-225. As with bidding I don’t think there is a static ‘good number’, it depends on your intentions and how you build your list.  I will say that I wouldn’t go below eight. It doesn’t matter how powerful those activiations are, if your opponent has three to five activiations more than you are, you are in trouble.

As part of running the Porg I try and improve the terrain we have available for the events.  I figured that since this week I am cheating you out of a Paint Blog update I would share some pictures of a project I finished for this Porg. 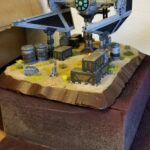 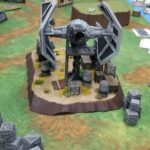 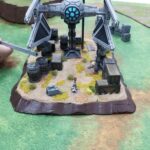 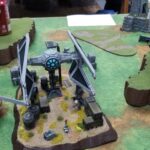 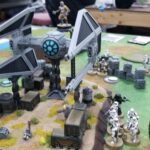 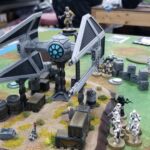