Welcome back.  Today we have a combined entry for the triple threat: Emperor Palpatine, Darth Vader, and the Imperial Royal Guard. Doing these units together felt right, as they are the Sith master and apprentice who run the Empire and their bodyguards.  Also they, or at least Palpatine and the Royal Guard, are colors not featured on other units, so doing them together made mechanical sense as well.

We will start with how I prepared the minis in general but then branch each group off so this doesn’t become an unreadable mess. First I have to say that assembling the Royal Guard was a pain in my ass.  They are the first FFG models that really caused me problems. The chest and back sections are joined by giant pegs. Now I am not sure what the cast is supposed to look like, but some of the pegs had rails and some whole had groves to receive them, just not on matching pieces.  Furthermore, the pegs seemed uniformly too big for the holes which were to receive them. The solution was relatively easy: I just trimmed the pegs until they fit and glued them.

I also straightened the weapons on the Royal Guard. I considered replacing them with brass rods, but in the end decided against it, mainly out of laziness.  Vader’s saber was replaced by a rod, while Palpatine went together with no issue. Vader and the Royal Guard got some filler to smooth out where their cloaks joined and then we were ready to prime.

The Royal Guard got primed grey and then base coated purple. The next step was to paint them red and here is where I tried something new. I had just picked up a set of the new Citadel Contrast paints, and figured I would give them a try.  So I gave the Royal Guard a coat of the ‘Blood Angels Red’. The result was okay but a little dark. Reflecting back, the purple base was a little too dark and the shade of red was also too dark. I am filling that away for next time.

I picked out the Royal Guard helmet visors and weapons with black, and then silver to bring out the weapons.  Their boots were then painted brown, but everything else stayed red. Cloaks got three red highlights while the underclothing just got two. I applied the textured paint and normal weather before the final highlight, and bamm, despite my misstep with the contrast paint, the Royal Guard were done.

For Vader’s armor, pants, and shirt I worked in highlights of dark and light grey.  I used gun metal for his cloak chain, saber hilt, and various details. I hit the areas I wanted light with another light grey highlight and used black and dark grey mix to highlight his cloak and other areas which would otherwise be flat black.  Somewhere in there, his base got hit with technical paint. I then washed him twice with black ink. I really made sure I got it into the folds of his armor and clothing.

While the bulk of Vader was drying, I painted his saber.  I didn’t go too nuts with the blades. Vader got a double coat of dark red as a base.  Then it got a light red highlight on two sides. On the sides perpendicular to those it got a white highlight. When I am done it will be gloss coated, and that is good enough for me.  To finish Vader, I got out the back and painted areas black which either had been over highlighted, or washed out by the ink. I got up my dark and light grey and added in highlights to reflect the repairs I did with black.  Finally, after I weathered his bases, did a last highlight on the cloak, and brought the details on his harness up for final highlight, Lord Vader is ready to inspire fear. 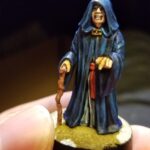 So that leaves us with the Emperor himself. I decided I wanted to do something other than black for him.  Vader is already black, Krennic is white, and Veers is grey/green, so in the spirit of color coding for convenience I made Palpatine blue. Like Vader, Palpatine was hand primed black, and then his cloak was painted black and his hands and face painted flesh color.  Here I used ‘Talassar Blue’ contrast to good effect in painting his cloak. His walking stick got painted brown, and his under cloak and sash were painted grey and red respectively. The contrast paint worked pretty well, but I would still highlight it later. I based him using technical paint and decided the Emperor does get dirty so I was careful to keep it neat near his cloak and used a paper tool to wipe away any excess.

I did a second coat of base flesh tone on Palpatine’s face and hands before inking them with black ink.  I gave his cloak two highlights, which helped make the normal blue of his clock seem darker. I also made the under cloak and sash relatively bright to help make the blue seem darker by comparison. When the ink on his face and hands dried, I went in with a very pale flesh tone to give him the pale sickly pallor he has.  For the eyes, I gave him two small white dots in the recesses of his eyes, the spark of genius, evil or otherwise. His prop was highlighted red, again to make the blue appear darker, and now Palpatine is ready to join his guards and apprentice in crushing the rebellion.

Thank you for coming out and reading today.  I know the last two updates, including this one, have been a little late.  I need to warn you that it may continue next week, as the 13th is the sixth Golden Porg.  I have quite a few projects I need to finish up before then. Next week might be omitted or delayed, or turned into a ramble around my modelling table as I try to get everything I need to get finished squared away.  Thanks for coming out.