So aspirations of a Tuesday update were dashed, due to preparations for the Houston area RPQ.  I did get both the Imperial heavy vehicles assembled and primed. I included the basic magnetization I thought necessary to get the most out of both kits, but otherwise kept it simple.  On top of a late update it will also be a lean one. And probably the last regular update. The school year starts soon and while I still eagerly await my thunder lizards, I will have other priorities.   Not the least of which is running he Golden Porg events. So while Painting Blogs will continue, they will no longer be regular.  Thanks for readings.

This model was a pleasure to assemble.  The pieces were easy to identify and required little cleaning. Only one piece, the back cover for the chassis, needed serious clearing.  I dry fitted each leg and entire lower assembly.  Once I had a pose I liked I glued each joint in sequence before posing the head and gluing it to the base.  I left the weapon plugs in the head unglued, they peg in well enough to not need magnets.  I cut the mortar to mount a magnet and marked the cabin. I like to make pilot holes for larger drilling projects, just make sure your hand doesn't slip.

This model was also fun to assemble but it was a little fiddly at points.  I didn't glue my tank to the base during assembly because I want to paint it first.  I cleaned and glued the tracks first.  Make sure the pegs match up and it is a breeze. To magnetize the pintle weapons I drilled a hole for a small magnet in the mounting bracket.  The weapon army was too small for a magnet, so I used a small drill bit and inserted a small bore paperclip into the arm.  This is magnetic enough to hold the weapon in place.  I left the heavy cannons and the gunner unglued for painting. 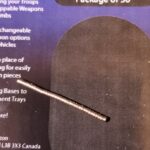 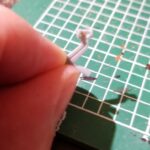 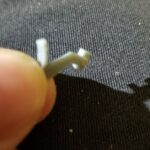 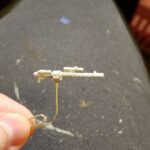 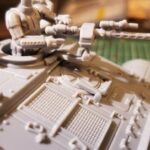 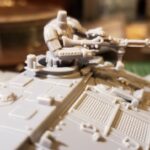