A Taste of My Own Medicine

Daniel Casslasy is veteran wargamer, former 40K GT champ, and four time Golden Porg winner.  I asked him to share his thoughts about some of the off the experimental lists he has taken to victory, and his feelings when he is on the other side of the dice. 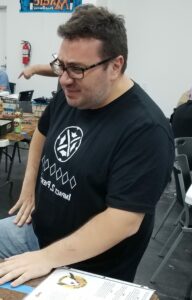 “The Golden Porg is the most prestigious Legion tournament in the English speaking world. The standard of play is sufficiently high that I can run list experiments there and get meaningful results.

If you go to https://legiontournamentcircuit.com/tournament-data/ you’ll see lots of Tournament winning lists but vanishingly few Pathfinders, Darth Vaders, Full Commando Squads, Wookies, Speeder Bikes etc. I’ve been meaning to find out if these units are duds or if there some utility there. I have, of course, omitted Airspeeders and Jyn Erso who are the worst units in the game in the air and land respectively.

Now if this were a 7th rate Legion city like San Antonio, Austin or Dallas, I'm confident any Houston Legionnaire could run trash with a 200 point bid and still go seal clubbing. But try that in Houston and when you come to, you'll be a 40k player.

The plan was to advance cautiously and pop reckless diversion on turn 2, put it back in my hand in turn 3 and then play it again on 4. One of  the Wookies always draw the short Diversion straw but because they have so many wounds they take a LOT to wear down.

Chewie would Guardian the marked squad when they took too many wounds and when one of the Wookies does give up his ghost and dies, a medic runs up and shoves a new ghost straight back in. The resurrected Wookie pops back in cohesion and this trick can be used to hide a guy behind LOS terrain when he comes back, keeping the squad and activation alive.

I expected to struggle but turns out the list is a bit oppressive. It's demoralizing for an opponent when they successfully deal 16 wounds to the only unit they can shoot and all the minis are still there.

Here's another one I took:

In this list I kindly ask my opponent not to kill my AT-RTs via 5 astromech droids. Cheap troopers and dangerous flamers give my opponents a hard choice to make. Kill the walking BBQs and risk objectives or kill the troopers supporting them and risk the BBQs reaching their lines.

This list struggled against imperials because of all the Impact, but against Rebels it was stunning. Without consistent ways to land vehicle damage in most rebel lists, the walkers make it and Rebels are wearing flammable paper as armor. It is oppressive and demoralizing to a rebel player looking down the barrel of 3 flamethrowers.

My most recent experiment was:

Lots and lots of bodies in big squads. Nothing more to note.

This is an example of finding a hidden gem. One squad of pathfinders with Pao is overcosted 66% of the time but incredible for certain missions and conditions the other 33%. It’s 100% of the time about the hardest unit to use in Legion and I think the most unforgiving. But take a deep bid, and hope for “recover the supplies” to show up on the right…

The other surprise was the full commando squads. These squads are perfectly costed, but get overshadowed by the rather dramatically under-costed strike teams. 3 sniper strike teams are 40 points cheaper than 2 full squads with snipers which makes the 3 snipers the proper competitive choice, however, with leia and 2 full squads, I cannot lose a sniper war. I have too many wounds to pluck before you get to the snipers.

This list is especially good against rebels so long as no one brings flamers.

Then it happened. Someone brought flamers. Three of them on AT-RTs. It's one thing to face a list and worry about how to deal with it, having had no experience. It's another thing to face a list and have no idea how to deal with it because you know there isn't. There is no moral to this story besides: be prepared for the weapons you use on others to get used on you.”