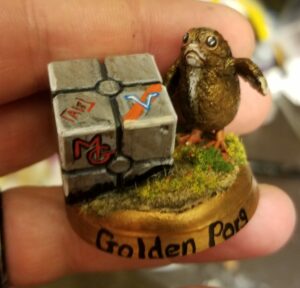 The fifth Porg saw a continuation of balance between the factions with six Imperial and six Rebel players out of twelve total players.  Faction balance has fluctuated over time but the ‘historical’ trend is toward parity. In this Porg, the Galactic Empire has a rough showing with only six wins between them. The corollary was the Rebel players did well overall. The skew with this data is that both 3-0 players were Rebel players, while both 0-3 players fielded Imperial forces. If we control for those players both factions break even on wins and losses.

Before I talk about lists I want to talk about activitions and bids.  Average Imperial activitations remained at 9.17 with only one player fielding more than nine activations, while the Rebellion saw ten activations become the norm for the first time with an average of 10.67 activations, up from 9.75 from the previous Porg. The Rebels also saw the most fielded activations in any Porg to date (lucky 13), more on that later.   The average Blue Player bid also came down from 3.3 points in the last Porg, to only 1.8 points this Porg. However, the number of players taking zero point bids was half of what it was at the previous event.

Overall list composition was diverse, with only a few units not included in any list.  Generic Officers, appeared in no lists as commanders, but players of both factions used them as unit attachments. Neither Vader nor Jynn hit the table at this  Porg. Imperial speeder bikes were the only unit not fielded by the Empire, while the Rebel Alliance left their air speeders (both T-47s and X-34s) at home along with their Wookie warriors and Pathfinders .  Both sides also exclusively field their Commando/Scouts in the strike team format rather than larger squads.

I now will talk briefly through some salient takeaways from the event.  I will try and avoid a long digression on any one topic, or extrapolating an admittedly small data set, too broadly. 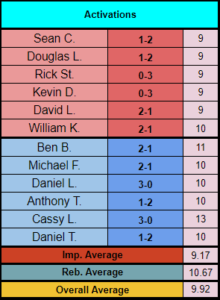 Of the six Imperial lists five were nine activation lists.  Collectively these lists had four wins. The one list that varied from this paradigm, with ten activations, scored two wins losing to the eventual event winner in round three.  Two lists fielded Imperial heavy vehicles (one AT-ST and one TX-225), but achieved only one win between them. I am hesitant to read too much into this data as critique of the effectiveness of those vehicles as I feel many players expected to see many more of these vehicles and built their lists accordingly.  In such a hostile environment, it unsurprising they had a rough showing and the two lists in question did face off against each other.

The thing which surprised me most was the departure from using Imperial Officers as commanders, and the resurgence of General Veers who appeared in four Imperial lists. Krennic appeared in two lists in the first Porg since his release, in one list, the ten activation lists, he was fielded in combination with Veers.  Palpatine was the only other Imperial commander taken, and he performed well taking his list to 2-1.

Death Troopers were widely fielded in their first event, while E-webs made an appearance in half of all Imperial lists. Scout troopers appeared in five lists, four as snipers and one as bomb chuckers. Boba Fett appeared in just one list.  Snow Troopers appeared in one list making use of the TX-225’s transport role. Storm Troopers performed in their now established role with DLT’s and all four specialists appearing in different lists.

For our purposes these lists can be typified in a few general ways.  Vehicles lists which were geared around supporting Imperial heavy vehicles had two representatives, one each for the TX-225 and AT-ST.  Each list saw Stormtroopers escorting droids, the TX-225 list saw Snow and Death Trooper in support, while the AT-ST was protected by Stormtroopers also caddying droids but were supplemented by snipers and E-Web teams.  Both vehicle lists were led by General Veers. Two other lists saw Veers and Stormtrooper cadre without any vehicles. In one he was supported by E-Webs, Death Troopers, and snipers. While in the other he was supported by Krennic and Royal Guard.  For non-Veer lists, Krennic led one supported by Boba Fett, without much success, while Palpatine lead a legion of Stormtroopers and stabatoers.

Now here is where that not ‘extrapolating from an admittedly small data set’ gets hard.  The presence of Death Troopers was interesting, and while they were used in different ways with different degrees of effectiveness, I expect to see that in future.  Krennic, the other new arrival, I also expect to see more of but perhaps not as much as Death Troopers who are flexible enough to fit many roles. The resurgence of Veers I think is an indication of the value of Spotter 2 and especially his command cards, over that of the Imperial Officer’s modest Spotter 1.

Paradoxically I think this is diagnosis of a major challenge confronting Imperial players.  The Imperial arsenal is full of powerful, effective, but expensive, options. The allure of these powerful units can lead to focusing on the abilities of individual units or small groups rather than army synergy.  I think that Veers has seen a resurgence because he is able to support a variety of units both with his abilities and command cards, thus simplifying the fundamental conundrum of Imperial list building.

Ten activations was the baseline for Rebel Alliance lists, with no lists taking less than ten, and two taking more than ten.  As noted before this represents an average increase of almost a full activity for Rebel players. Five lists were led, at least in part, by Leia, making her the most prolific commander in the event.  She was run as an individual commander in one list, with Luke in two lists, with alone Chewie once, and once with both Han Solo and Chewie. The only Rebel list to be without Leia saw Solo and Chewie lead the Rebel effort.  Leia was the only rebel commander to be fielded without either another commander or operative to support them.

Rebel troopers proved as ubiquitous as their white armored opposites, providing platforms for Z-6s and droids of different flavors.  It is interesting to note that one player scorned Z-6 entirety and still did pretty well (he won the event). All Rebel specialists were fielded except the Comms Specialists.  Fleet Troopers saw more action that Imperial Snowtroopers, appearing in four lists, one list even included two units, and they were generally lead by an officer and sported their scattergun. Rebel Commando teams appeared in five Rebel lists, in four as snipers and one as saboteurs.  The presence of Commandos was to exclusion of all other Rebel special forces options.

Contrary to expectations Rebel vehicles were far more numerous that Imperials.  Though only two Rebel lists took two vehicles, they combined to put six of them in the field, making the AT-RT the most fielded vehicle in the Porg, continuing their historical trend in that regard.  Two Rebel lists also fielded 1.4 FD laser turrets, favoring these stationary emplacements over either of the two speeders available to Rebel forces.

Despite take fewer different units than their Imperial counterparts Rebel list diversity was no less interesting, with several different trends emerging.  Two Rebel Players chose to field AT-RTs and built two very different lists around them; one choose to support them Rebel Troopers shepherding astro droids around, while another ran Han and Chewie back by the redoubtable firepower of Z-6 squads.  These lists went 3-0 and 2-1 respectively, demonstrating a potential that is often unrecognized.

The two lists which took 1.4 FD defense turrets backed them up with snipers, scattergun fleet troops, and Z-6 troopers squads each had two heroes; Luke and Leia for one list, and Leia and Chewie.  The Leia - Chewie list saw an extra sniper activation and medical droids in half of the Z-6 Squads. The last two rebel lists saw the now famous (infamous?) saboteurs lead by Luke and Leia, and a three hero Han, Leia, Chewie list that included a pair of Fleet Trooper units. 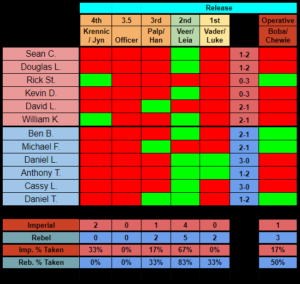 I think the Rebel situation is different, but not alien, from the one confronted by Imperial players.  With generally more fragile units, Rebel players are faced with the challenge of building a list that more than the sum of its parts. I think one of the reasons we saw a more limited selection of units in Rebel lists is related to economies of scale.  Rebel striking power is also concentrated in their heroes, which were taken in much larger numbers than their imperial counter parts (8 Imperial Commanders or Operatives to 13 for Rebels). A corollary of this why I think no rebel speeders were fielded.  When faced with necessity of building a competitive list, the speeders are less flexible, are harder to synergize with other units, and lack staying power; all things that Rebel heroes are quite good at.

If you had asked me late last year which Operative I thought would get more table time I would have told you Boba Fett.  Now on the precipice of the second Operative release the opposite looks to be true. Answer as to why I think resting in my concluding paragraph of the Rebel Faction analysis.   Chewie is a flexible unit, able to support other rebel characters, protect troopers, and deal damage. At an affordable point cost he is in many ways everything the the neglected rebel speeders are not.

On the topic of the rebel speeders starting with the X-34 first. While the base vehicle is fair cheaper than the T-47, it also requires upgrades make it effective in combat.  Without the ability to perform the reverse transport jank of the TX-225, and limited to transporting a single model its role as a transport is extremely narrow. In order for it to perform in a combat role it it needs to take upgrades that take it into the same cost bracket as the T-47.  Even then the X-34 and the T-47 both a vehicles without a role, difficult to hide, their survivability is low and they can have difficult time pushing damage (the X-34 far less so that for the T-47). While the theoretical potential for an anti-vehicle role exists, in practice neither vehicle has an avenue to clearly display its potential.

In the competitive world this means that both are relegated to the parking lot. Nevertheless I can convinced that X-34 has a role (T-47 is more questionable).  Whether that is as suppression distributor, hero shuttle, or anti-tank buggy remains to be seen.  Acknowledging the limited scope of my practical experience fielding them, I believe that in a Grand Army format will give the X-34 will have more room to demonstrate its potential; both in terms of space on the table and reducing the impact of their high points cost.

As for Imperial vehicles I expect that the TX-225 will see more play in the future.  At least a much as the AT-ST, which I acknowledge, has an atypically strong following in the Porg meta.  What happens (or doesn’t happen) to certain rules relating to movement and transport will undoubtedly affect it in some people’s eyes.  But in my estimation it will remain an effective, if expensive unit, in the Imperial arsenal.

All told it was an interesting and exciting event.  I think there is a lot of news ideas out there.  Time will help refine and mature those ideas, and the addition of new releases will add their own flavor to the mix.  I am looking forward to seeing how it shakes out the next Golden Porg on 13 July 2019.  I know Daniel will be there, so be sure to stay of his way. 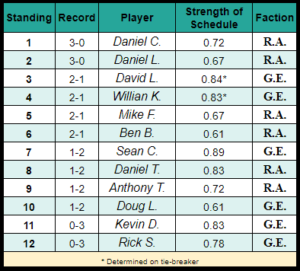